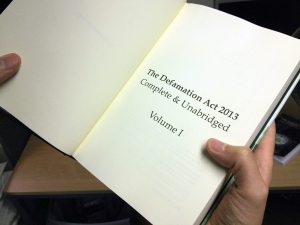 Defamation is a false statement about a person communicated as fact to one or more people which caused damage to the target’s character and reputation. It may be in written form, which is referred to as libel, or in spoken form, which is referred to as slander. Some of the general harm caused by defamation include ridicule, hate, shame, or even contempt by others to the person whose false statements were intended. This can result in a lawsuit for damages.

If you have been the subject in defamatory statements or publications, you should seek legal advice immediately to stop further harm and to help you get the damages you are entitled under the law.

Key Factors to Consider Before Taking a Defamatory Statement to Court:

1. The statement must be false.  Not all negative statements about us are defamation. We must know the distinction between an honest criticism and a false opinion that is intended solely to harm the reputation.

2. There must be actual harm. It is normal for a person who has been subjected to a malicious statement to be angry. However, anger is not enough. There should be actual injuries to be addressed and quantified in order that a lawsuit for defamation in prosper.

3. You need evidence. You need to present evidence of the defamatory material in court to prove your case.

Let us help you. Contact Paulus Law Firm now and our competent and experienced lawyers will assist you throughout this battle.