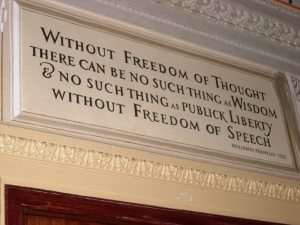 The first amendment is a mandate directed against congress. As such, the protection afforded by the first amendment only applies to public employees. This is because the government directly influences their manner and conduct of employment. Although not directly applicable to employees of the private sector, the employer in such sectors could still be liable if they violated any anti-discrimination laws. Therefore, although the first amendment directly applies to the public sector, it is still important to determine if whether the private sector employee’s ability to exercise his right is interfered with through discriminating means.

Rights Protected Under the First Amendment:

Be aware of the rights that you have and don’t be afraid to fight against those who violate it. Contact Paulus Law Firm and we will fight the legal battle with you.